Named after a famed American Indian Wars leader, this lengthy historic trail was blazed by General George Crook to connect Camp Verde and Fort Apache in order to fuel his efforts. Today, about 25 miles of the original path that runs up the Mogollon Rim is maintained. While it’s too much for a single hike, the trail supports common sights along its entire length and portions of it are easily accessible from many spots and connector trails.

The trail weaves to and from the edge of the Mogollon Rim, either granting spectacular views of the pines you’ll be surrounded in or of Arizona’s central mountains and deserts that stand out far away from the escarpment’s rocky drop off. If you keep a close eye out on the trail itself, you may see a few original chevrons and blazes that still mark the path to this very day. 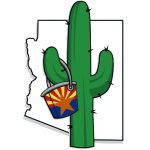