Arizona is often thought of as an empty, rocky desert state by people who don’t know much about it or what to expect aside from rumors of ‘dry heat’; however, the Mogollon Rim— and the sights that this short trail holds— prove that state stereotype quite wrong.

Resting within the Tonto Natural Bridge State Park, the Pine Creek Loop is a short, 1 mile hike through fantastic forest that isn’t too difficult to complete. The iconic sight for this trail is what’s worth the trip though. Believed to be the largest travertine bridge in the world, Tonto Natural Bridge stands 183 feet high and 150 feet wide over a 400 foot long tunnel that you can actually go under. It’s definitely a memorable experience heading under the bridge, as you’ll be showered by a waterfall that supplies moisture for both cacti and moss in equal amounts. If you want to explore the entire underbelly of the bridge, you’ll have to boulder over loads of roads that stick out of pools and other smaller falls. Best to only attempt this if you’re fit and flexible. 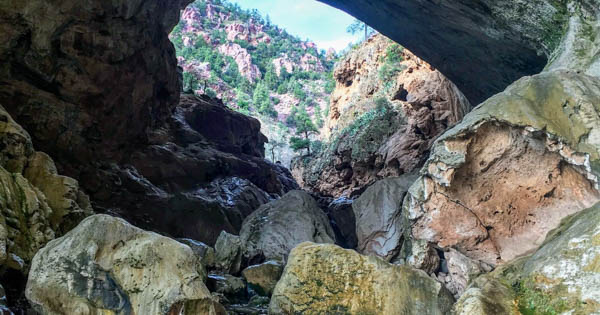